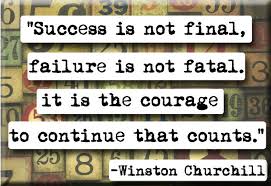 It’s going to happen.  It’s inevitable. At least once in your life you are going to fail at something.  Everybody has failed even if they refuse to admit it. Interestingly enough, some of the greatest success stories were born out of some form of failure: Steve Jobs, Walt Disney, even Oprah.  C. S. Lewis said it best “Failures are the finger posts on the road to achievement.”

Failure can be a real opportunity!

“Success consists of going from failure to failure without the loss of enthusiasm”  Winston Churchill
“Failure should be our teacher, not our undertaker. Failure is delay, not defeat. It is a temporary detour, not a dead-end. Failure is something we can avoid only by saying nothing, doing nothing, and being nothing.” – Denis Waitley
Learn from failures, forgive yourself, stand up tall and move forward with fresh resolve.